Mike Berenstain discusses the value of the Program.

The Berenstain Bears have been entertaining and helping children learn for over 55 years. The warm and trusting bears connect with children, their parents, and their grandparents. The immediate connection engages your members and brings attention to financial education. Our program can be easily implemented at any credit union.

The Berenstain Bears Financial Literacy Program is a youth education and marketing suite developed exclusively for credit unions in response to the documented need to introduce financial education to young learners. Children are exposed to age-appropriate money management concepts through hands-on activities as they learn the many benefits of credit union membership. The program resonates with generations of adults who grew up with The Berenstain Bears and trust them.

Benefits of the Program 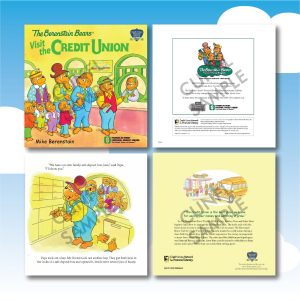 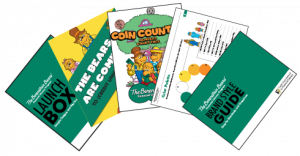 Licensed credit unions are able to align their brand with The Berenstain Bears to promote financial literacy. Naming and usage rights include the option to brand custodial accounts under the moniker "Cub Account." Studies show that children who actively participate in the management of their money are more likely to maintain responsible fiscal habits into adulthood. Licensees also have access to a bouquet of graphics, activities, and turnkey school lesson plans that comply with national standards for financial literacy. Kindergarten through third grade curricula encompass books in The Credit Union Financial Literacy Series, and although they were designed by certified educators, anyone-branch, staff, volunteers, school personnel-can easily deliver the lessons.